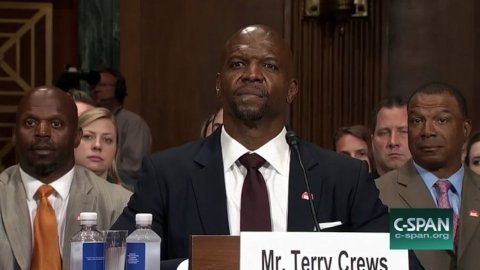 Actor Terry Crews testified in front of the Senate Judiciary Committee this week to advocate for civil rights protections for victims of sexual assault via the Sexual Assault Survivors' Bill of Rights.

Crews described an alleged 2016 incident with a Hollywood agent to shed light on his own experience with sexual assault. The actor has been an active male voice in the #MeToo movement.

Tarana Burke began the movement more than a decade ago, and it grew to national prominence in October 2017 as women began to speak out against sexual abuse in Hollywood.

We couldn't do Crews' words justice, so here are some key takeaways:

“I sit here before you in this committee just as an example — that a lot of people don’t believe that a person like me can be victimized. What happened to me has happened to many, many other men... I have had thousands and thousands of men come to me and say, 'Me too.'"

“This is how toxic masculinity permeates culture. As I shared my story, I was told over and over that this was not abuse that, this was a joke, that this was just horseplay. But I can say that one man's horseplay is another man's humiliation.”