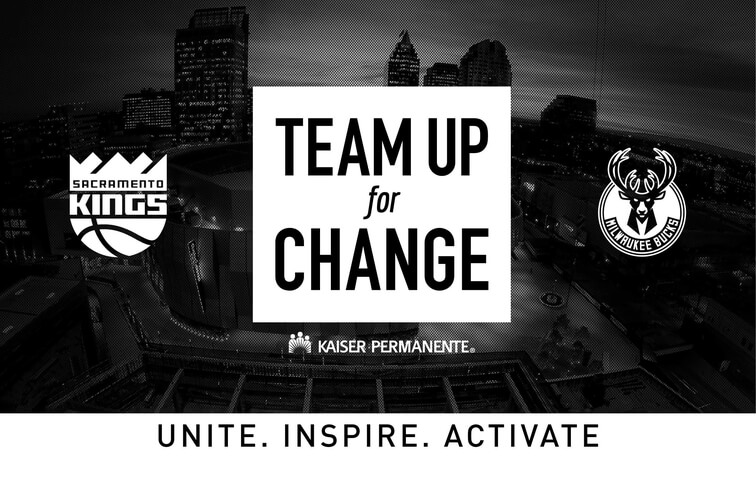 The National Basketball Association's Sacramento Kings and Milwaukee Bucks have partnered with Kaiser Permanente to host "Team Up for Change," a day-long summit set to address social injustice.

According to a press release, the partnership "aims to unite, inspire and activate community leaders, law enforcement and youth advocates from Sacramento and Milwaukee by highlighting local and national perspectives from innovators and trusted experts who are advocates for social justice and equality."

The initiative marks the first time professional sports organizations are formally using their positions to address issues of injustice in their own cities.

Said Sacramento Kings Owner Vivek Ranadivé, “We believe it is our responsibility to use our platform to make the world a better place starting right here with our communities. Basketball has the power to bring people together by bridging racial, gender and economic divides."

In the past year, both the Kings and Bucks franchises were directly impacted by the ongoing issues surrounding social injustice in our society. In May 2018, Bucks guard Sterling Brown was unnecessarily tased and arrested in response to a minor parking infraction. The Bucks expressed support for their player at the time and promised to do more to address these issues in their city.

In March 2018, the Kings' Golden One Center became the center of protests surrounding the shooting death of Stephon Clark, a 22-year-old unarmed black man. At the time, Ranadivé took center court after the Kings game and promised to fans and the citizens of Sacramento, "We here at the Kings recognize that we have a big platform. It's a privilege, but it's also a responsibility. It's a responsibility that we take very seriously."

"We stand here before you, old, young, black, white, brown, and we are all united in our commitment. We recognize that it's not just business as usual, and we are going to work really hard to bring everybody together to make the world a better place, starting with our own community, and we're going to work really hard to prevent this kind of tragedy from happening again."

The Team Up summit builds on the impact these two organizations have had in the last yea as they work to fulfill their promises to their communities.