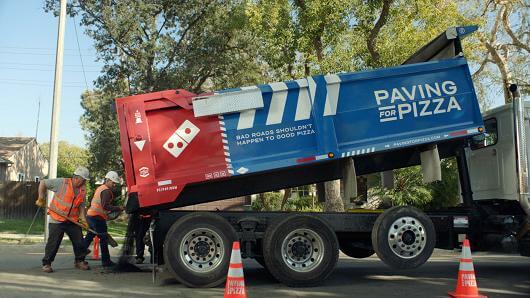 Domino's is partnering with U.S. towns and cities to fix potholes across America's streets.

Domino's recently paved hundreds of potholes in towns in California, Delaware, Georgia, and Texas complete with the company's "OH YES WE DID." logo.

Moving forward, Domino's will provide 20 grants to towns and cities to have their potholes fixed.

The company cited potholes as a cause for concern because of "what they can do to your pizza." But there is no doubt this is very much a PR move by the pizza makers.

Social media was abuzz for the last two days with many wondering why the cities themselves weren't taking proper action while praising the company's move.

With thousands of grants applications already piling in, it's clear people are thankful for Domino's (and their dough).